I was honored to have Boomercafe.com publish Two Boomers Confront Bullying and Harassment by my friend and Colleague, Ellery “Rick” Miller and me.

Two baby boomers, mindful of what they learned long ago when they were in school, have teamed up to examine a dual trend that has only gotten worse: bullying and sexual harassment. We might be past the point of being the victims, but we have kids, we have grandkids, and there’s something everyone needs to know. Ellery “Rick” Miller, from Columbia, Maryland, and Eric Mondschein, from Queensbury, New York, are the co-authors of Sexual Harassment and Bullying; Similar But Not The Same, published by the Education Law Association.

As baby boomers we remember from our own childhoods that every school has its share of bullies and most of us have heard, “Oh he’s just a bully, don’t pay any attention to him and he’ll leave you alone.” How many recall receiving guidance like that growing up? Bullies, it seems, were just part of the territory going to school, we were told — just one of those necessary rites of passage.

“Sexual Harassment and Bullying; Similar But Not The Same” by Miller and Mondschein.

Recent years, the news has been full of incidents of bullying that ended with tragic consequences, whether suicide or school shootings. With social media, bullying has become a 24/7 activity that reaches into the homes and minds of victims. School administrators have focused on bullying with policies and plans.

However, this focus on bullying has caused many schools to neglect another serious issue: sexual harassment. Students are federally protected from harassment based on sex, religion, national origin, and ethnicity. But the old adage that “if the only tool you have is a hammer, everything looks like a nail” seems too often to be the case. Bullies and harassers are both male and female and they act to hurt, intimidate, or gain a sense of power over their victims.

Well, not any more! Enough is enough, as they say, and finally people need to take it seriously and call it what it actually is — assault, battery, menacing, theft, intimidation, harassment, destruction of private property, and the list goes on.

Students need to speak up. They need to tell their parents, teachers, or school administrators. And these adults, these people in authority, need to be responsible and take action. In fact, they have a fiduciary obligation to children in their care to do so. Bullying and sexual harassment can no longer be tolerated or excused.

Turning a blind eye is no longer an option. No child should be humiliated, intimidated, or made to fear going to school by some other students’ actions. While bullies or harassers may have their own emotional problems, the first issue to be addressed is protecting the victim, not the aggressor.  Make no mistake, their methods may differ — from physical intimidation to cyber bullying on the Internet, but the results are the same. Victims of bullying and sexual harassment, girls and boys, have been found to have problems with depression, anxiety, low self-esteem, and poor school attendance, resulting in poor school performance and, most tragically, suicide. 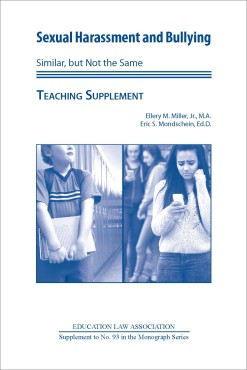 It is important to help create a school environment where all children feel safe and can learn to the best of their abilities. It should no longer be a place where bullying and sexual harassment are just part of growing up. Ignoring the problem will not make it go away. Policies should be developed or reexamined and plans implemented to attack the problem from the very first day of the school year. School administrators, teachers, staff, students, parents and the community, and that includes us, need to be involved. All should be informed and forewarned that bullying and harassment will not be tolerated, and appropriate action will be taken.

The book “Sexual Harassment and Bullying”  and its accompanying “Teaching Supplement” can be ordered here.