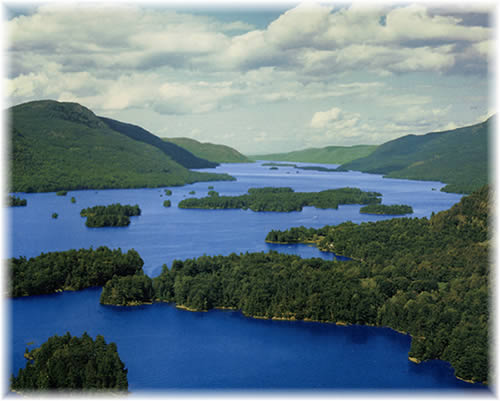 Nicknamed the Queen of American lakes, and a lake that Thomas Jefferson, in 1791, wrote “is without comparison the most beautiful water I ever saw,” still is today. Located in the Adirondack Mountains of upstate New York, it is a lake that is crystal clear, serves as drinking water for many of the people who live around her, and is home to a number of a variety of game and pan fish not to mention the wildlife that abound around her shores. Dotted with islands along her over 32 mile north-south length, she is quite deep, some parts reaching 200 feet, and varies from 1 to 3 miles (1.7 to 5 km) in width. The lake has approximately over 109 miles of shoreline.

The lake has an abundance of game fish that include landlocked salmon, lake trout, rainbow trout, northern pike, pickerel, large and small bass and  perch. Blue gill and crappie are plentiful. Whether by fishing from the shore or boat one would have to work very hard not to catch something for dinner.

It should also be noted that many of the islands on the lake have state run campsites for over night camping, and many have their own docks for campers to secure their boats.

For those curious enough to visit the lake there are many places to stay, from campsites to motels to spas and resorts. You can  rent boats of all kinds from canoes to speed boats and sail boats and you can take dinner cruises around the lake on steam ships and even a paddle wheeler from a bygone era.

In sum, former President Thomas Jefferson really said all that needs to be said of the lake, “Lake George is without comparison, the most beautiful water I ever saw; formed by a contour of mountains into a basin… finely interspersed with islands, its water limpid as crystal, and the mountain sides covered with rich groves of silver fir, white pine, aspen and paper birch down to the waters edge: here and there precipices of rock to checker the scene and save it from monotony.”