I was honored to have an excerpt from my book Life at 12 College Road published on Boomercafe.com, the digital magazine for baby boomers with active lifestyles and youthful spirits.

With the 2014 Olympics winding down, we love this excerpt called Going for the Gold from Eric Mondschein’s new book Life at 12 College Road

. It evokes the kind of imagination and imagery that all of us baby boomers conjured up when we were kids. We’re just glad Eric remembers his, and remembers Going for the Gold. 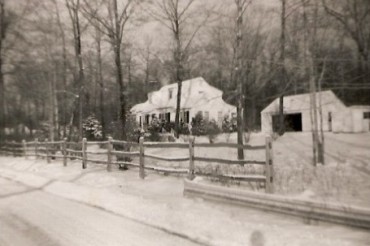 The house at 12 College Road one snowy winter years ago.

In early 1964, the Winter Olympics were held in Innsbruck, Austria. My brother and I were glued to the television, cheering on the USA. It was quite disheartening to see us come up short time after time, while other countries took home the lion’s share of the medals. The Soviet Union took the most gold and won more medals than any other nation. We did win a few, but none in the two-man bobsled competition.

No, the gold in that prestigious event went to the British (who insisted on calling it a bobsleigh) and the silver and bronze medals went to the Italians. When we witnessed the American bobsled team come in seventh, Jeff and I just knew we had to do something about it. We could not let this stand.

As we listened to “God Save the Queen,” my brother and I resolved to beat the Brits ourselves. He and I would soon be standing on that medal platform with the Stars and Stripes flying and the “Star-Spangled Banner” ringing out. It was a matter of personal and national honor.

So began the arduous task of determining how we could unseat the Brits. For starters, we needed a bobsled. (There was no way we were going to ride a bobsleigh.) We had snow saucers, but those were designed for only one person. They were not sleds in any way, shape, or form. So right away, we were stumped. We couldn’t come up with anything that would work. 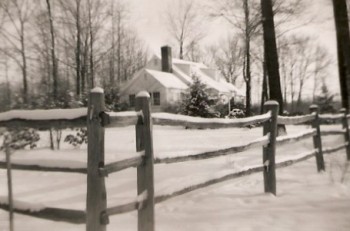 The house at 12 College Road one snowy winter years ago.

So we decided to take a break and get something to eat. On this particular day, we had to make our own lunch, as Mom and Dad had gone into the city to attend an event with one of Dad’s clients. It always amazes me how so many of our best ideas can be found when we stop looking for them. And sure enough, as we walked into the kitchen, there on the floor in front of us was the plastic runner. My mom had put it down on the floor to keep us from tracking mud or snow throughout the house. We both saw it at the same time, and almost in unison, we shouted, “It’s perfect!” And it was. It was five feet long and almost two feet wide. Never mind the fact that it was see-through, thin, and incredibly pliable. It was a bobsled, no doubt about it.

Now we needed to find a course — something built for speed. Unfortunately, there was little snow in the yard. The driveway had been plowed and was bone dry. Disappointed, we came in and removed our jackets and shoes. As we headed through the kitchen to the hall, we looked to our right. And there in front of us was the ultimate bobsled course: the stairs leading to the second floor. Of course!

The stairs were carpeted. At the top they banked hard to the left. All right, so they did not really bank, so much as make a ninety-degree turn to the left before the final five steps to the second floor hallway. And there was another hard left turn near the bottom. Kind of like an inverted U shape, but with straight lines rather than curved ones. With a couple of Mom’s long and squishy bolster pillows, Jeff and I agreed that we could transform those hard turns into banking curves. Yep, this would make a world-class Olympic bobsled course, all right.

Next we had to design our uniforms. We decided that a simple white T-shirt with the letters USA in blue on the front and back would be perfect. We did not want to use the color red, as that was too, well, Soviet. So, with the help of a blue marker and an alphabet stencil, we had our custom USA gear.

We also agreed that, like the members of all Olympic bobsled teams, we had to wear helmets. Luckily, we both had football helmets with faceguards. They were white with a blue stripe down the middle. We used our markers to stencil USA across the back of each helmet. Beautiful. We also agreed that we would wear our snow gloves to protect our hands as we made the run down the course. After all, we would need to hold onto to the edges of the runner— er, bobsled.

We created what we thought was a great banking turn using Mom’s two bolster pillows, which we liberated from the den couch. We stacked them on top of each other in the corner on the landing, where the upper set of steps met the stairs heading to the first floor. It was the final curve, or, in bobsled racing terms, the “Finish Curve…”